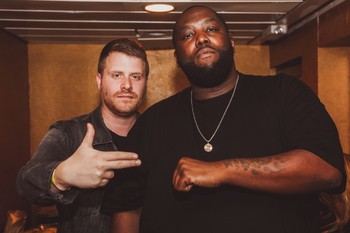 The Yankee and the Brave
"Me and El-P got time to kill
Got folks to kill, on overkill
He hangin' out the window, I hold the wheel
One black, one white, we shoot to kill"
— Oh My Darling Don't Cry, Run The Jewels 2
Advertisement:

Run The Jewels is a rap duo consisting of El-P and Killer Mike.

In 2011, Killer Mike was introduced to El-P by a Cartoon Network executive (of all people). Before Run The Jewels was formed and after the two had met, El-P had produced Mike's 2012 album R.A.P Music and was followed by Killer Mike's appearance on the track "Tougher Colder Killer" from El-P's 2012 album Cancer 4 Cure. Because the two albums were released weeks from each other, the two opted to tour together. The success of that tour eventually led to the formation of Run The Jewels.