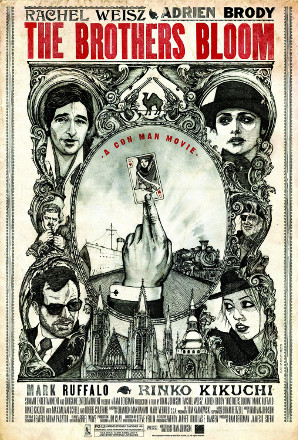 As far as con men stories go,
I think I've heard them all:
Grifters, ropers, faro-fixers,
Tales drawn long and tall.
But if one bears a bookmark,
In the confidence man's tome,
It would be that of Penelope,
And of the Brothers Bloom.
— First lines of the opening narration, The Brothers Bloom
Advertisement:

Directed by Rian Johnson, The Brothers Bloom is a 2008 caper film about two brothers who've worked together as con men for their entire lives. At the top of their game, the younger brother Bloom (Adrien Brody) finds himself increasingly reluctant to do shady deeds. His older brother Stephen (Mark Ruffalo) persuades him to do one last con, accompanied by their regular accomplice Bang Bang (Rinko Kikuchi), with eccentric heiress Penelope Stamp (Rachel Weisz) as the mark. Naturally, Bloom falls head over heels in love with Penelope.

A classic caper film in many respects, the Brothers Bloom offers all the twists and turns you might expect. It also offers engaging characters, fantastically sharp dialogue (something of a Rian Johnson trademark), and some interesting examinations as to the nature of storytelling. Oh, and lots of scenery.