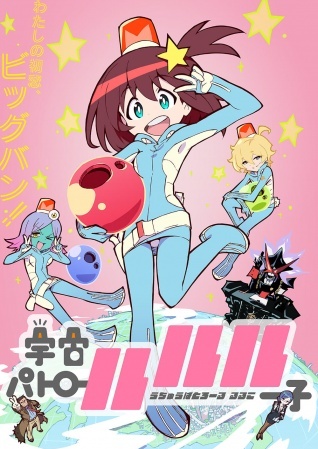 Fight for Justice!
"I'm Luluco. Ogikubo—an abnormal town that's the only one of its kind on Earth, a Space Immigration Zone where humans and aliens live together—is where I live with my dad as a completely normal middle school student. But to be honest, I hate this weird town. I want to live a normal life, like people in other towns do."
Advertisement:

So begins Luluco's narration on what seems to be a relatively normal day for her, waking up and having breakfast with her father Keiji. But when he accidentally bites into a cryonic pill and turns into a Human Popsicle, she is forced to take over his job as a member of the Space Patrol to make ends meet and pay for his unfreezing.

Space Patrol's Hot-Blooded skeleton leader Over Justice equips her with a suit that transforms her into a giant gun, sending her to root out crime in her school and meet her new law enforcement partner, who turns out to be a New Transfer Student named Alpha Omega Nova. Luluco isn't too sure about the whole Space Patrol thing, but this mysterious blonde-haired boy makes her heart skip a beat. If the Big Bang was the moment when the universe began to expand, is our 13-year-old heroine about to have a Big Bang of her own?

The anime aired as part of the Spring 2016 Anime season, and also ran during the Ultra Super Anime Time block. An English dub was provided by Funimation and released in October of 2017

In January of 2017, director Hiroyuki Imaishi and other ex-Studio Gainax staff released a doujin that reveals what happened to Nova after the final episode. It can be read here

(Warning: contains spoilers for another Imaishi series. Read at your own risk.)

Since this is a short and densely packed series containing a lot of surprises, being even one episode behind can expose you to major spoilers, and the character pages pretty much spoil everything. Read these pages at your own risk, and consider staying away altogether if you aren't caught up (Although considering that each episode is less than eight minutes long, getting caught up shouldn't take you long).

I'm Luluco. This is the story of my first love. [...] A whole lot has happened, but I love Ogikubo and this universe, where the abnormal is the norm! And until the day I meet him in some other dimension... To be continued!
SEE YOU NEXT TRIGGER ANIMATION
Feedback

See You Next Trigger Animation

The final scene of Space Patrol Luluco has her high fiving Akko to announce the Little Witch Academia anime.

See You Next Trigger Animation

The final scene of Space Patrol Luluco has her high fiving Akko to announce the Little Witch Academia anime.