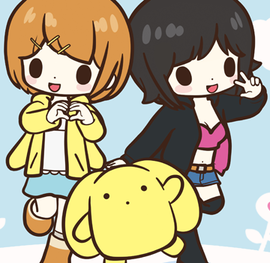 Wooser no Sono Higurashi (Wooser's Hand-to-Mouth Life) is a CGI anime series, premiering in the fall of 2012. It follows the daily exploits of Wooser, a strange creature resembling a mouthless bunny, and his random thoughts, percolated with his occasional lechering at Rin and Ren, the girls whose house he bums in.Season 2 premiered in January of 2014, and Season 3 in July of 2015.