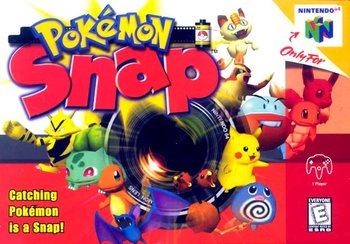 You might've caught them all, but you haven't SNAPPED them all.
Advertisement:

Pokémon Snap is a Nintendo 64 game based on the Pokémon series developed by HAL Laboratory and later released on the Wii Virtual Console and Nintendo Switch Online Expansion Pack. It was first released in 1999 in Japan and the US, and released in 2000 in Europe and Australia.

You have to CATCH THEM ALL! on a photo safari. The game plays as a Rail Shooter but with a camera, with points for capturing Pokémon in certain poses, or having multiple Pokémon in one shot. As you progress through the game, you open up new areas of Pokémon Island to explore, and Professor Oak gives you access to new items, which can be used to draw out Pokémon or get them into different poses.

This game has nothing to do with one of the three mascots of Rice Krispies (although trademark problems with Kellogg's did cause uncertainty about the player character's name for a while). Or a cute blue and white humanoid drawing.

On June 17, 2020, a follow-up for the Nintendo Switch called New Pokémon Snap was announced. This installment is developed by Bandai Namco Entertainment, and was released worldwide on April 30, 2021.