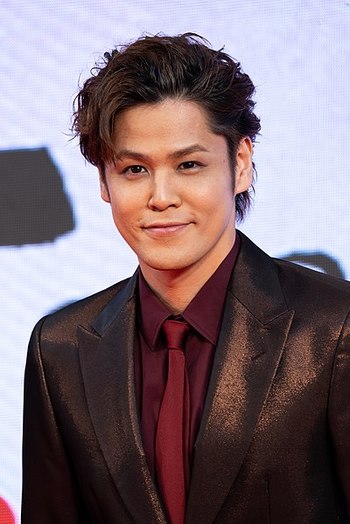 But, in an industry not known for having men with killer looks, this lad is one of them. While his vocal range is rather low his acting skills are impressive, going from a clueless sailor who was caught up in the war between Exorcists and Akuma (as Chaozii), to The Chessmaster known as Light Yagami in Death Note, to the Idiot Hero Bishounen Tamaki of Ouran High School Host Club. Basically he's capable of acting as just about any type of character.

Before becoming a voice actor he was a musical stage actor, having performed in The Prince of Tennis musicals as Fudomine player Tetsu Ishida. His very first voice acting role was Riku of Kingdom Hearts, and his career just kept going from there. Recently, he lends his voice to Gym Leader Cilan of Pokémon and Shin Kamiya in Tekken: Blood Vengeance.

He's known to work alongside Maaya Sakamoto as well, and rumors of an offscreen romance between the two of them floated around for years, but he married another girl (she herself married their fellow voice actor Kenichi Suzumura recently). He and Sakamoto most recently appeared together in Tekken: Blood Vengeance. He also appears alongside Miyu Irino, usually as friends or rivals.

In December 2008, he announced that he was to be married and his then fiancée was pregnant (a big deal for him, since health problems were this close to rendering poor Miyano sterile). This produced a nerd rage by his rabid Fangirls which was a sight to behold. In 2013 he confessed he can't swim

Thanks to a few of his roles, he practically is a Fountain of Memes. Just take a look at this trope page for example.

Before we go to his roles, I'll take that potato chip... AND EAT IT!!!

This is my description...? It doesn't look symmetrical at all! AAAGH! *fell to his knees, beating the ground* I am an unmitigated swine! A trash heap of a person! That's why my article isn't even symmetrical! Damn it, I'm so hopeless I could die!
* Ahem*
All according to plan.
If you want to edit this article, try again in 20,000 years.
El, Psy, Kongroo.