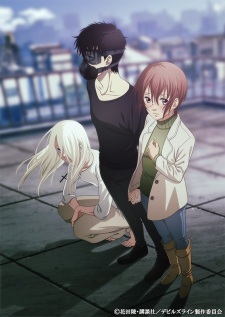 In Japan, there are two divided races. One is humans and the other is vampires (also known as devils). The devils appear to be regular humans on the surface, but when they see blood, they become uncontrollable monsters that could kill anyone. To this end, they need to use sedatives to calm themselves down and try to blend in with society, even if it's a little bit of a challenge for them.

The story tells us about a meek college student called Tsukasa Taira. She is saved by Yuuki Anzai from a vampire who tries to attack her. However, it turns out that Anzai is a half-devil who works for a police task force that specializes in devil-related crime in Tokyo. As Anzai continues to keep guard over Tsukasa, the two quickly forge a tentative bond and, needless to say, Anzai needs to control his own bloodlust in order to protect Tsukasa from harm. However, Anzai also needs to face another threat from the shadows, a devil extermination organization called the CCC which tries to eradicate all of the devils in Japan.

Created and illustrated by Ryo Hanada, Devils' Line is a Dark Fantasy manga series that was released in 2013 and was published by Kodansha and the English version was released by Vertical. It also has an anime adaptation produced by an obscure anime studio called Platinum Vision that was premiered on April 7, 2018. The show consists of twelve episodes and an OAD.

After over five years of serialization, Devils' Line has ended on December 22, 2018 with 66 chapters. Currently there are five extra side-story chapters being released.