Character subpage for Dio Brando, the main antagonist of Phantom Blood and Stardust Crusaders, with his influence lingering in Diamond Is Unbreakable, Vento Aureo and Stone Ocean.

Beware of potential spoilers for all Parts. Spoilers for part 1 will be unmarked! 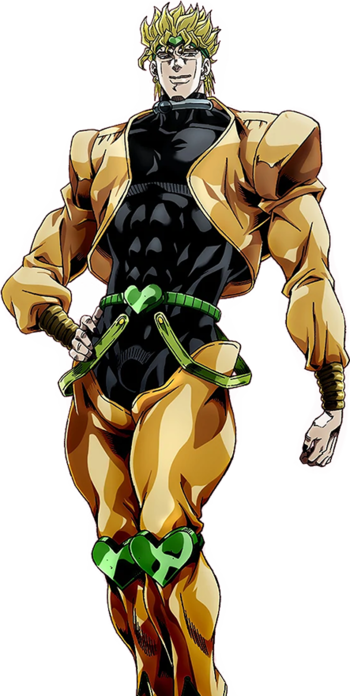 Dio as he appears in Phantom Blood

"You were a fool to attack me. I have disowned my weakness in favor of life everlasting!"

The first main antagonist to be introduced. Dio's peerless hunger for domination and evil has either directly or indirectly resulted in conflict for each member of the Joestar family, making him the overall Big Bad of JoJo's Bizarre Adventure.

Originally a scornful child of a petty thief in 1880s England, after poisoning his own father, he is adopted by George Joestar and makes it his goal to utterly ruin Jonathan's life in order to become the estate's sole inheritor. When that plan fails, Dio ends up using the Stone Mask to become a vampire and plans to take over the world for himself; however, a daring battle with Jonathan ends with him left as disembodied head. Sometime later, Dio makes his return on a ship when he turns most of the passengers into monsters and announces he would take Jonathan's body for his own and manages to deliver a fatal blow to his foe, though Jonathan uses the last of his strength to ensure Dio would not be able to escape as the ship explodes and sinks to the bottom of the sea.

Dio would eventually resurface during the 1980s in Stardust Crusaders, having attached his severed head to Jonathan's body to resume his goal of obtaining his ideal world, but meets resistance from Jonathan's descendant Jotaro Kujo. After meeting with Enya Geil, he gains a Stand called The World.

Named after Ronnie James Dio. His last name comes from Marlon Brando. It was also confirmed that his likeness was originally based on Roy Batty.

open/close all folders
#-D
"Hush, boy! You won't speak my name in vain again!"note In Japanese: "That's a name you should speak with a great deal more reverence!"
E-M
N-R
S-Z
The World (SPOILERS) 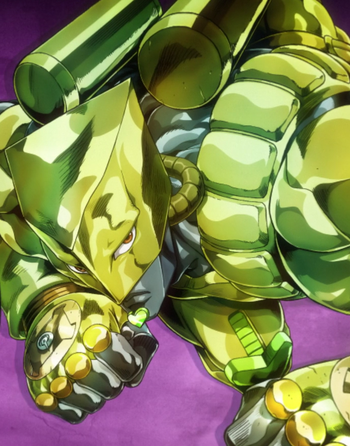 "The World! Bring time to a halt!"
"With my Stand, I have the ability to rule the world! What can you do in the face of such awesome power?! Behold, THE WORLD!"

Named after the tarot card, The World is a short-ranged Stand with the power to stop time for a few seconds. It was awakened thanks to the Stand Arrow, but is not considered a sentient Stand. It is considered one of the most powerful Stands in the series. An offensive Stand with extremely formidable combat skill, speed, and reflexes, it is also the Evil Counterpart to Jotaro Kujo's Star Platinum.

"I AM THE IMMORTAL DIO! I AM DIO!"
Feedback