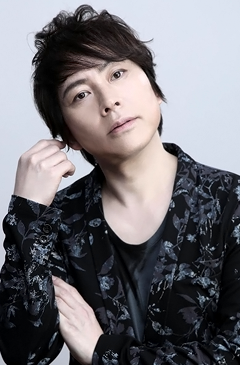 Ryōtarō Okiayu (born November 17, 1969, in Kitakyushu, Japan) is one of the more well-known seiyuus in the business, being around during the Megumi Hayashibara era and still voicing characters today.

Voice-type, it's very hard to miss him. His more well-known voice type is the 'aloof' (not necessarily big brother) character, whether it's plain cold, or just sadistic. He is also known for some Hot-Blooded roles, snobby roles, or downright silly roles, and he's very good at changing his voice quality. Really hard to pigeonhole this guy. As a plus, having been raised in Osaka, he sometimes uses his Kansai Regional Accent in his roles.

He was married to and divorced from fellow seiyuu Naomi Nagasawa, but later married again in 2013 to another fellow seiyuu Ai Maeda. He also likes Super Robot Wars, though he's not as hardcore a fan as Hikaru Midorikawa, but they still keep in touch, play together, and they have quite a few relationship roles going together.

Just for those who are curious, it's kinda ironic that in Sengoku Basara, Motochika is voiced by Ryuzou Ishino, who in Mobile Suit Gundam Wing voiced Chang Wufei, rival of Okiayu's character Treize. It's even more awkward in that Okiayu himself in Basara is Hideyoshi.

Wait what? End of the page!? No! This isn't happening! There's no reason for me to go on...! What am I... WHATAMITYPINGFOOOOOOOOOOORRRRR!!!!???
This description is an elegant thing...
Excellent!