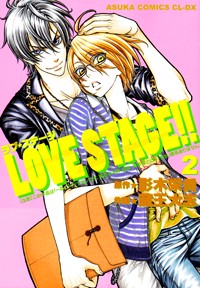 Love Stage!! is a Boys' Love manga created by Zaou Taishi and Eiki Eiki, running from 2010 to 2016 in Asuka CIEL magazine. It received a 10 episode anime adaptation as part of the Summer 2014 Anime lineup.

Sena Izumi is an otaku in a family full of entertainers; his mom is an actress, his dad a singer, and his older brother a member in the famous music group Crusherz. His family wants him to join the entertainment business, but he doesn't want any of that, instead he wants to be a mangaka. But when he reunites with Ichijou Ryouma, an up and coming actor who had fallen in love with him when they did a commercial together as children, it seems like his family will get their wish.

Love Stage also has a side story by the name of Back Stage!!, which is a novel about Izumi's older brother Shougo and Sena's Production manager Sagara Rei. That novel eventually got its own manga adaptation in CIEL.

A live-action adaptation came out in 2020, with another (this time a Thai production) to follow in 2021.