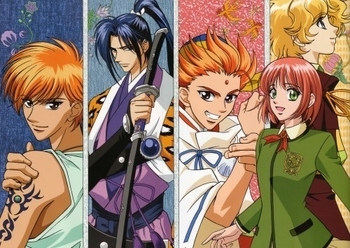 Harukanaru Toki no Naka de (loosely "Within the Expanse of a Distant Time") is a series of otome games developed by Ruby Party and published by Koei. It is a part of the NeoRomance label, which also includes Angélique and La Corda d'Oro.

The basic premise involves a female Ordinary High-School Student — often accompanied by a couple of friends — drawn into a parallel world that bears a strong resemblance to historical Japan during the Heian (and later -- Bakumatsu) Period, where a lot of traditional Japanese/Eastern myths and beliefs have a material form, co-existing peacefully with some of the more generic element-based spells. (It was hardly, if at all, identified as Japan until later games: most characters tend to only refer to the setting as "another world".) There, the girl assumes the position of the Miko, or priestess, of the Dragon-God, a deity believed to be capable of saving people from current disasters. On her quest to complete the mission, she is accompanied by eight attractive young men called the Hachiyou (lit. "Eight Leaves"), who gain their powers from The Four Gods.

While the plot of the original game (and to a greater extent its manga/anime adaptations) has been accused of plagiarizing noted as having a lot of similarities to Fushigi Yuugi (or, sometimes, Inuyasha), the franchise definitely stands on its own, and the later entries actually managed to improve the premise enough that it no longer feels "borrowed". Each of the five main games features a new set of characters and a new conflict, so the series doesn't get too repetitive while still keeping (loosely) the same general theme.

This series consists of the following games, sorted by the main stories:

The "original" storyline featuring the Miko and her two friends from school having to save Heian-Kyou from the ambitions of the powerful Oni Clan who want to rule the city on their own.

Skipping a hundred years (on the parallel world timeline) from the first game, the second one employs the new Miko from "our" world to sort out a conflict between the emperor and the retired emperor which brought chaos to Kyou once again.

Skipping a hundred years again, this time the three summoned characters arrive into the parallel world right in the middle of what is clearly an equivalent of the Genpei War, and have to side with the Genji in order to bring an end to the battles.

This entry abandons the historical theme in favour of the mythological origins of Japan, thus technically acting as a prequel to the series. The conflict is now between two countries in another world, the Miko being an amnesiac princess of one of them who didn't know about her past before getting involved with the story.

The entry that returns to its roots in historical themes yet managed to get Tainted by the Preview due to skipping over to the Bakumatsu Period (therefore marking itself as a rival to Otomate's Hakuouki franchise) and replacing the main voice cast. Unusually for the series, it doesn't have the heroes permanently Trapped in Another World, but allows for travelling between the modern and historical settings.

The heroine this time has been whisked away to the Taisho era.

The latest entry of the franchise. This one heads to the Sengoku period, with the heroine transported to an alternate Earth in the middle of a feud between the Four Deities of Heaven and Earth—and she learns that this was her birth world.

Apart from the main series' canon, there are also games based around a What If?-type story that puts the cast of the first three main games together into a Dream Land setting.

The original game spawned a 17-volume manga authored by the series' character designer Tohko Mizuno; originally published by Hakusensha in LaLa magazine, it ran from July 1999 note Japanese Wikipedia currently says February 2000 to January 2010 (shifting to LaLa DX in February 2007). There are also extra chapters dedicated to the second and the third game, and an entire extra volume concerning the fourth one. The manga is licensed in North America by VIZ Media under the title Haruka — Beyond the Stream of Time.

The popularity of the franchise led to creation of several anime adaptations:

In addition, two live-action stage plays based on the franchise were made in 2008 and 2009, Harukanaru Toki no Naka de: Maihitoyo and Harukanaru Toki no Naka de: Oborozoushi. The former, as the title suggests, is an adaptation of the theatrical movie; the latter is a completely original story note heavily focused on Yasuaki, still starring the cast of the first game.

"Core" tropes (related to the concept in general):