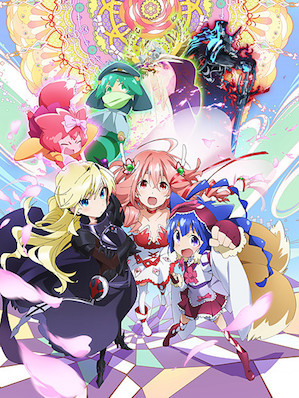 Matoi the Sacred Slayer (Soushin Shoujo Matoi, literally "Clothes-God Girl Matoi") is an Anime First original production from White Fox. It's the story of Magical Girl... sorry, Exorcist Girl Matoi Sumeragi, given the power to "wear" a Shinto god to fight and exorcise demons called Nights. Unfortunately, all Matoi wants is to be a normal girl with an ordinary life, so suddenly becoming a famous "Exorcist Girl" throws a multitude of wrenches into that plan.

Matoi the Sacred Slayer aired during the Fall 2016 Anime season, and it has been licensed for an English release by Sentai Filmworks and can be watched on The Anime Network

Matoi the Sacred Slayer contains examples of the following tropes: