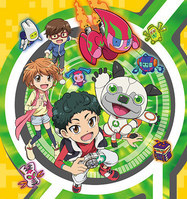 Miracle Wanda, more commonly known by its Japanese name (Kamiwaza Wanda) is an anime that premiered on April 23, 2016.

In a world where every event has been turned into programs, there are mysterious monsters known as "Promin" that maintain said world. However, many Promin who have turned into bugs known as "Bugmin" are responsible for creating problems in the real world. Left alone, they may eventually turn into a big problem. To stop the Bugmin from causing more problems, a boy named Yūto encounters the space dog-like robot Wanda, and together they use special devices and items to capture Bugmin and revert them back to Promin by using an ability known as "Kamiwaza" (miracle), they are able to fend off Bugmin with it.