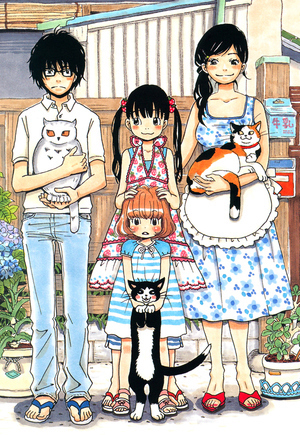 March Comes in Like a Lion, also known in Japanese as 3-gatsu no Lion (Sangatsu no Lion, lit. The Lion of March), is a seinen Slice of Life/Drama manga series written by Honey and Clover's Chica Umino. It has been serialized in Young Animal since 2007, with 15 volumes released.

Rei Kiriyama is an adopted adolescent who recently started living alone, financed by his salary as a professional Shōgi player. Despite his independence, however, he's yet to mature emotionally, and his problems continue to haunt him in his daily life. His relationship with his adoptive family is strained, and he has difficulties interacting with his fellow high school students. While he's able to manage a few cordial relationships with his peers in professional shogi, as well as his homeroom teacher, Rei has a relatively isolated lifestyle in a place that's almost unfamiliar to him.

The series has two different adaptations—a TV Anime series produced by Studio Shaft, and a live action film. The anime first aired as part of the Fall 2016 Anime season, with a second season following in 2017. It is available for simulcast and streaming on Crunchyroll here

. The anime is licensed in America by Aniplex USA, who produced a dub for it

with Bang Zoom! Entertainment. The live action film was released in 2017.

Alternative Title(s): Sangatsu No Lion, March Comes In Like A Lion