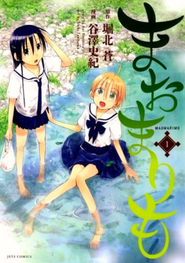 Maomarimo is a short seinen manga written by Aoi Horikata and illustrated by Shiki Tanisawa. It ran in Young Animal from 2010 to 2011.

Like most rural Japanese villages, Tamano celebrates an annual festival in honor of its own own local deity, the Marimo (seaweed ball) guardian spirit. But unlike most such communities, the Marimo festival includes a Virgin Sacrifice. Nothing bloody or horrific, mind: It's a purely symbolic sacrifice that involves dressing a local maiden in ceremonial robes and making her spend the night in a boat out on the lake. No muss, no fuss, no blood, and so far, no casualties.

Unfortunately, this year there's a problem. This year's sacrificial maiden, Akoya Nota (Ako to her friends) is prone to seasickness and hates boats. So her beloved twin brother Mao decides he'll go in her stead and protect his more outgoing sister just as Ako has always protected him. Mao dons the robes and boards the boat while Ako is distracted. They may not look anything alike but they're about the same size and in the robes and the dark who's to know? Well, apparently the God knows, because there's a loud booming sound followed by a dense fog, and when the boat drifts back to shore the next morning, Mao's been turned into a girl!