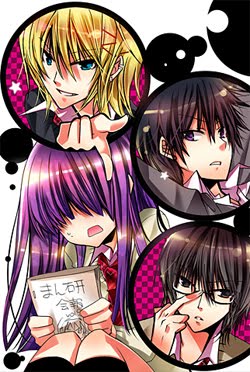 "I am Tezuka Kanna, 15. A girl who loves manga."
—Kanna Tezuka
Advertisement:

Manga Dogs (GDGD-DOGS) is a manga series by Ema Toyama, which was serialized in the shoujo magazineAria from 2010 to 2013.

When a professional manga course is launched in Tokiwa High School, fifteen-year-old Kanna Tezuka is happy to be able to draw manga. The last thing she wants is for people to notice her manga because her shojo manga projects are actually being published in a magazine and she's currently trying to boost her manga's rank, but when three boys—Akatsuka Mitsuo, Fujio Fujio, and Shouta Dan Naisen—appear and stumble upon her secret, Kanna may have quite a dilemma on her hands.