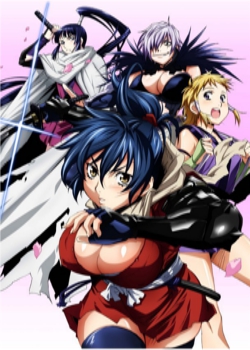 Manyu Hikencho (literally "Magic Breast Secret Sword Scroll") is a manga by Hideki Yamada that ran in Tech Gian from 2007 to 2012. A 12-episode anime adaptation ran during the Summer 2011 Anime season.

In this strange time, the social status of a woman is entirely dependent on the size of her mammaries. The more favorably endowed tend to live the life of aristocracy and wealth. The less-than-ample are treated like trash. Of course, a system such as this would lead to a very erratic society, with wealth shifting hands haphazardly every generation. That's where the Manyu Clan comes in.

The Shogunate employs the Manyu Clan, a group of samurai who know the endless intricacies and knowledge of the human breast, to keep the rich and poor in their place. Using knowledge and techniques passed down through the generations, the Manyu Clan nurtures the future aristocracy to reach their buxom potential. They also dispatch of the poor who develop massive, magnificent mounds through the use of their secret slashing technique, which rips the "soul" of the breast out of the target's flesh. Without harming their supple body, of course.

Chifusa, the future successor of the Manyu Clan, becomes disillusioned of the crazy society in which she lives, and flees with the sacred scroll of the clan, which explains all of their breast-growing secrets, as well as the technique to destroy the breast. Chifusa gained her status as successor not because she was the eldest of the aristocracy (although being one of the previous successor's children helps a bit), but because of a technique she and she alone possesses: the ability to not destroy, but absorb breasts. While remarkable, this is mostly a hindrance to Chifusa. Despite this, she goes on a Robin Hood-esque quest to right the wrongs of society and to punish the unjust who flaunt their wealth, mainly her father who runs the society, Munenori Manyuu.

Now has a character sheet in progress. Please add all character specific examples there.