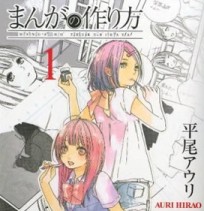 Asuka Kawaguchi has published her first manga at the age of 13 but for the six years since then, she couldn't produce anything new despite desperately trying to. Her problem is lack of topics she is interested in enough to write about. Noticing that Boys' Love Genre and Yuri Genre works are selling well, she decides to take a shot at the genre, but first, she needs to "gather experience" and starts dating her kohai Morishita, who has previously professed her love for her. Very soon, she discovers that Morishita is actually "Sachi", her favorite manga artist writing under a pen name. As the story progresses, the two experience highs and lows in life but by supporting each other, they make it through anything and the bond between them grows ever stronger.

Manga no Tsukurikata (How to Make a Manga) is an on-going manga about mangakas by Auri Hirao. It is also about Girls' Love, although it's mostly hidden in subtext: Kawaguchi and Morishita don't kiss or openly announce their relationship, and the former is still reluctant to acknowledge her feelings, but she doesn't deny it either, and there's a plenty of hugging and tender touches. The drawing style is rough (maybe, deliberately so) but slightly more realistic than the usual Moe style, probably to emphasize the realism of the story. If you are searching for Fanservice and comedy, you may move along now, but in case you look for an evenly paced, laid-back yuri romance, Manga no Tsukurikata is the right choice. Also, take a look if you are a fan of Hiyori from Lucky Star.