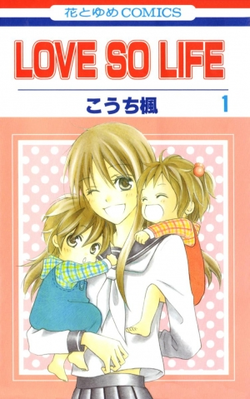 Resist the urge to squee.
The place where I feel happy for a moment might not be where I belong, but even if it's not forever, this is my one precious place.
— Shiharu Nakamura
Advertisement:

Love So Life is the story of Shiharu Nakamura, a first year high school student who, one day, is hired to work as a nanny for two adorable twins left in the care of their uncle, Seiji Matsunaga. The story follows the daily lives of the makeshift family as errands are run, memories are made, and relationships are kindled in a romantic slice-of-life. Be warned, cuteness saturation reaches critical levels in every chapter from the twins and the adult cast in equal measure.

The series was serialized in the magazine Hana to Yume from 2008 to 2015, being compiled in a total of 17 volumes. It was followed up with a sequel titled Life so Happy, which featured Aoi and Akane as fifth graders.

Love So Life is provides examples of: