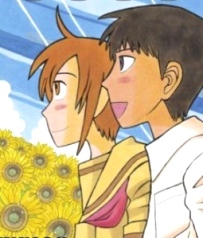 Love' Roma is a screwball Romantic Comedy that follows Hajime Hoshino and Yumiko Negishi. The series starts off the bat with Hoshino confessing his love to Negishi. It turns into one big awkward moment and only gets more so. This turns out to be the first time they have ever really talked, Negi claims she does not even know his name.

The series progresses as they grow closer and get into a very comfortable and equally awkward relationship. They meet many side characters and have rivals in their romance, a few fights and a few make ups. The series is Slice of Life on Japanese school children and some what a Coming-of-Age Story for both the protagonists. The story has a very sitcom, "doing nothing" feel but is rarely boring. The wide cast of misfits provides constant entertainment because honestly, the next one is crazier than the last, and that's saying something for this series.

Love Roma started as a published one shot, and evolved into a manga series. It ran for 5 volumes. It was illustrated by Minoru Toyoda. It began serialization in 2003 Afternoon a Japanese manga magazine. The first bound volume was released in September 2003 in Japan.