I'm Taking Her Home with Me! 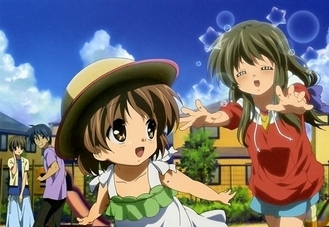 Fuko can and will go ahead and make her a younger sister.
"HAUUUU~! OMOCHIKAERI [I wanna take it home with me]~!"
— Rena Ryuugu, Higurashi: When They Cry
Advertisement:

There are times when something is just so pure, innocent, right and adorably cute that even the most level-headed persons are struck by a quaint phenomenon we TV Tropers like to call Cuteness Proximity, in which all pretenses of stoic maturity are dropped to reveal an affectionate and nurturing, sweet-tongued [1] teddy bear who wants to hug the subject of cuteness all day long. Sometimes, it can get so bad that said persons cannot comprehend and withstand the intense emotional effects.

Sometimes, the Cuteness Proximity is so intense that it stirs not only mere affection, but actual paternal and maternal love. The afflicted will want to actually become the adorable one's father, mother or older sibling, and will:

Another way this can end badly is if the abductor Does Not Know His Own Strength, and their overly physical expression of affection spells doom for poor little "George". Occasionally, the "cute creature" in question is either Ugly Cute at best, or downright monstrous at worse.

See also Abduction Is Love, Endearingly Dorky. Often invoked with an Abandoned Pet in a Box. Has absolutely nothing to do with Taking You with Me. Hopefully.

Alternative Title(s): Omochikaeri, Im Taking Him Home With Me