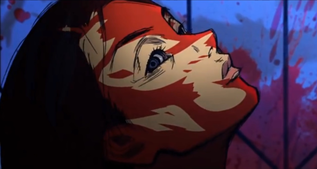 Reveling in the blood of the pedophile Yakuza boss who orphaned her.
"It was definite now... I had absolutely... killed him. There was no sense of accomplishment, nor one of regret. [...] Instead, right now... I was feeling like my heart had been stolen by the downpour [...] and how comfortable it felt."
— Keiichi Maebara, Higurashi: When They Cry, Ch. 3 — Tatarigoroshi
Advertisement:

So you've just killed a person...and it feels good. Like, really good.

This trope is common both to vendettas and to serial killings. Vastly different motivations aside, the following euphoric calm can be one and the same. All that bided time, all that anticipation and planning, finally pays off. Now able to admire their work, the killer basks in the moment and takes it all in.

Compare Evil Feels Good and Smiting Evil Feels Good, with either of which this may overlap. May lead to This Is Your Brain on Evil if the killer chases this high again. Contrast Laughing Mad, which is Ax-Crazier (though that certainly may follow this trope); Blood Lust and Orgasmic Combat, where the ecstasy is fairly sexual but not necessarily derived from killing; Blood Knight, where the fight is enjoyed as much as (or more than) the kill; and Dissonant Serenity, where the killer is this calm during the struggle. Not to be confused with Tranquil Fury, which wouldn't kill a fly but is no less terrifying. Frequently combined with Blood Is the New Black.

Since the notoriety of more recent real-life killers can deeply affect their victims' loved ones, please be cautious when adding Real-Life examples!