Series / Would I Lie to You? 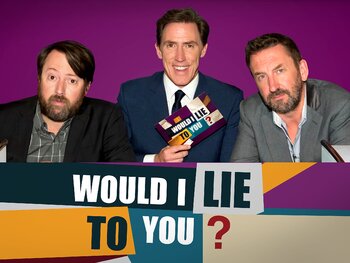 Would I Lie to You? (begun in 2007) is a British Panel Show based around truth and lies. Essentially, over a series of rounds the panellists (two team captains with two guests each) will read out a series of statements about themselves; the opposing team must figure out whether they are true or not. It is currently on its fifteenth series.

The host for the first two series was Angus Deayton, in perhaps his biggest hosting job since being sacked from Have I Got News for You; from Series 3 he was replaced by Rob Brydon of Gavin & Stacey fame. The team captains, Lee Mack (from Not Going Out) and David Mitchell (from everything else) have remained consistent through all the run (the exception being one episode in the eighth series where Lee was unable to attend the recording and Greg Davies took his place). The guests will typically be one comedian and one guest from another field per team, with actors and television presenters being the most common for the latter — although singers, sportspeople, and even politicians have appeared.

Advertisement:
Rounds
The current rounds are:

There is now a Recap page covering the truths and lies told throughout the series.

Compare with Two of These People Are Lying, which is also about players guessing if a particular topic is true or false.