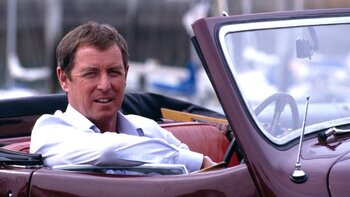 John Nettles as Jim Bergerac
Bergerac is a BBC detective series that ran for 9 series from 1981 to 1991. It starred John Nettles in his Star-Making Role as Jim Bergerac, a recovering alcoholic, who acts as a detective in the police force of the island of Jersey. Later on, he becomes a Private Detective.
Advertisement:

Has nothing to do with Cyrano de Bergerac.