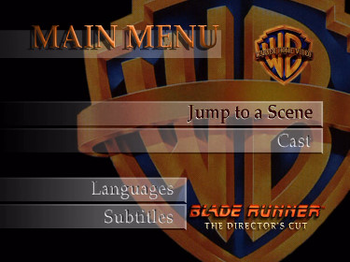 Wow, you couldn't even give us a menu with Harrison Ford?note It should be noted that this, along with Twister, was one of the first DVD releases ever. "Cast" and the Warner Bros. logo are the only special features.
Advertisement:

Essentially a way to suck money out of the clueless, the witless, the careless and the impatient, the Vanilla Edition DVD is about as basic as a movie or TV DVD can get, basically comprising the footage, subtitles if you're lucky, and - if you're really lucky - a trailer and some cast biographies.

The Vanilla Edition is usually released a month or so before the Ace Custom or Limited Special Collector's Ultimate Edition, so that those who are desperate to watch the movie now (or don't pay attention to what they're picking up, or don't have a clue about the industry) will snap it up, only to buy it again shortly afterwards once the better edition is released if they actually care about the special features in the slightest.

Manufacturers say that they do this because some people just want the movie and not the extras and shouldn't have to pay more for something they don't watch, which is sometimes true. But it's also true that there's money to be made in double-releases.

Note that some DVDs are just released without extras because the studio doesn't think that it will sell well enough to warrant spending money on commentaries, making-of movies, etc. These may retroactively become Vanilla Editions if, some months or years later, the studio changes its mind and releases a special edition with more features.

Furthermore, this is becoming a standard marketing strategy to get customers to purchase Blu-ray versions of films by largely creating a Vanilla Edition for the DVD version and having the special features in the Blu-ray instead. A similar method was used when VHS was being phased out.note VHS copies did sometimes have bonus footage, after the credits of the movie. Today, digital downloads such as iTunes Extras and the content available on Netflix are inherently the same thing.

It also can be argued that Vanilla Editions make for better rentals, as a frugal troper could blast through all the additional material in an evening. It makes sense for the studio to make it so you must buy the DVD to watch the special features.

And hey, if the work in question has up to that point been trapped in the kind of grey, murky, nebulous legal limbo of copyright law that forces you to Keep Circulating the Tapes, a Vanilla Edition is better than nothing.

If you look at the special features list and it includes "interactive menus" (as though uninteractive menus were ever an option outside of restaurants) then you're holding either a Vanilla Edition or just a really crappy DVD. Unless it's also pitching "scene selection"; then it's just really old (these were common proclamations made on the earliest DVDs from 1997 and 1998). If it's a burn-on-demand disc from a service like Warner Archive that focuses on just bringing much-requested but not-exactly-blockbuster titles to DVD, it's almost always going to be a Vanilla Edition.