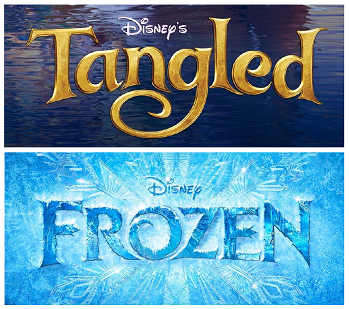 From the studio that brought you Enchanted!note Top:Tangled, Bottom: Frozen
Advertisement:

Sometimes when a work wants to sound comedic and edgy, or maybe just easy to remember, it will adopt a title consisting of One Word; a verb in the past perfect

tense. That is, presenting something as both in the past and completed. "Finished" rather than "was finishing".

The verb in the title was also chosen likely because it applies to a character, or something else in the story.

Occasionally they'll even take a word that isn't a verb and make it into one. This trend seems to go in and out of style, though currently it seems to be in vogue once again.

This trope doesn't always transfer well across languages, and works will often be given more self-explanatory titles overseas. In Russian, for example, it doesn't sound any kind of comedic or edgy. That's why Tangled was released in Russia as Rapunzel: A Tangled Story.

A Sub-Trope of One-Word Title.

Note: When adding examples, please give whatever context you can, even if it's as simple as "It's called 'Empowered' because it's a Protagonist Title and that's the main character's codename." If Word of God or Word of Saint Paul exists for why the title was chosen, give that.