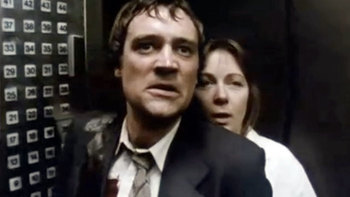 Elevated is a 1996 short horror film by Vincenzo Natali and starring David Hewlett.

In an apartment building late at night, two people get into the elevator. They are soon joined by a panicked, blood-stained technician (Hewlett) who claims that evil monsters are in the building and trying to get inside.

It is in many ways a thematic precursor to Natali's subsequent movie Cube, featuring a small group of people coming into conflict with each other when locked up in a small, dangerous area with an ill-defined, almost featureless outside world.