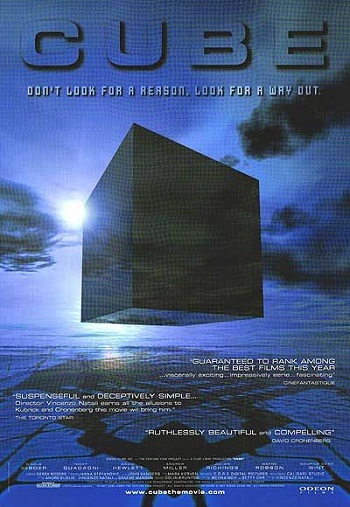 Holloway: I think we have to ask the big questions. What does it want? What is it thinking?
Worth: "One down, four to go."
Advertisement:

Cube is a Canadian science fiction/horror film series, consisting of Cube (1997), Cube 2: Hypercube (2002), and Cube Zero (2004). The first movie is directed by Vincenzo Natali, the second by Andrzej Sekula, and the third by Ernie Barbarash.

The three movies are each based on the same premise; there is a gigantic, mechanical, cube-shaped structure (the purpose and origin of which are almost completely unknown) that is made up of lots of smaller cube-shaped rooms. Each of these rooms has 6 doors, one on each wall and one on the ceiling and one on the floor, which lead into adjacent, identical rooms, only differing by color. Some of these rooms are safe, while others are equipped with booby traps such as flamethrowers and razorwire which kill a person who enters the room.

In each case, a group of strangers wakes up in this mysterious structure, with no knowledge of how they got there or why they are there. In order to escape from the prison, however, they must band together and use their combined skills and talents to avoid the traps and navigate out of the maze, while also trying to solve the mystery of what the cube is and why they are in it. However, the pressure of being in the cube usually drives one or more of the characters insane, and they start killing the others.

Cube Zero was slightly different from the original two movies in that it also dealt with some people on the outside of the cube whose job it was to control the cube and oversee those within. It also attempted to answer some of the questions of the series.

Lionsgate is currently working to reboot the series

Not to be confused with The Cube. A Japanese Remake of the first film was released in October 2021.