Film / Cries from the Heart 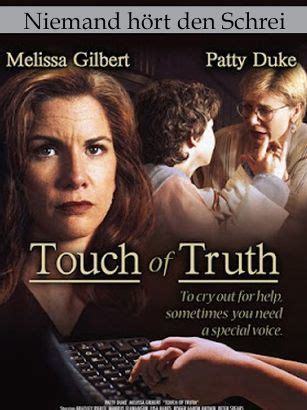 Cries from the Heart, released on DVD as Touch of Truth, is an American TV movie written by Robert Inman and directed by Michael Switzer. It aired on CBS on October 16, 1994.
Advertisement:

Seven-year-old Michael Barth (Bradley Pierce) is severely autistic, seemingly noncommunicative, and prone to violent outbursts, and his mother Karen (Melissa Gilbert) struggles to cope with him. Her ex-husband Roger (Markus Flanagan) persuades her to put him in a residential school. At the school, Michael's behavior and abilities improve dramatically, with the help of his therapist Terry Wilson (Patty Duke) and his caretaker Jeff Mace (Peter Spears). Seeing his frustration with his limited options for communication, Terry teaches him facilitated communication

, a controversial technique in which Terry supports his hand while he types letters on a keyboard. Michael uses the method to reveal a terrible secret, and is eventually required to testify in court using facilitated communication.

In real life FC is, to put it mildly, controversial. One side argues that most studies have found that in fact the facilitator is doing the typing, similar to an Ouija board; that many false abuse accusations have been made with FC; that some users have good fine motor skills otherwise and would seem unlikely to need support to point to keys; and that the user is often looking away while the facilitator is usually looking at the keyboard. The other side, which includes people such as Mel

who claim to be part-time FC users, argues that the studies tend to have small sample sizes; that many autistics test well below their actual abilities; that facilitation can involve only touching someone's shoulder or holding up a letterboard, which would seem to make guiding the person's hand impossible; that one common symptom of autism is a fluctuating, wildly uneven skill set, including in motor skills; and that typing with one finger without looking is a learnable skill, no more impossible than ten-fingered touch typing. This wiki will not be taking a side in the debate.

Cries from the Heart contains examples of: