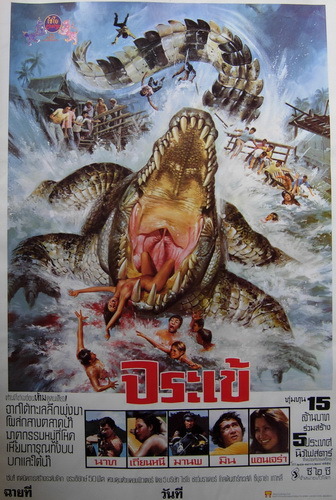 "Since his very beginning, man has been trying to destroy nature.
Perhaps one day he may succeed.
But, then again, on that day, nature may rebel, and THIS, could happen..."
— Opening Monologue, international version
Advertisement:

A schlocky, but memorable Thai Jaws rip-off helmed by the infamous Sompote "Sands" Saengduenchai (best known for Hanuman vs. 7 Ultraman and his attempted thievery of the Ultra Series using that film). Bears the distinction of being the only Chaiyo film to be dubbed into English (though the international version is its own train wreck due to the nonsensical re-editing), and is by far the easiest to come across because of thisnote Space Warriors 2000 was more of a compilation of older material and there was almost no actual dubbing done.

A nuclear test causes a massive hurricane and mutates a Crocodile to gigantic proportions. Dr. Akom and Dr. Strom, two overworked hospital M.D.s dealing with the massive amount of casualties from the disaster, decide to spend the weekend on vacation with their families, but all is not well in the water and the doctors' loved ones are picked off by the Crocodile. Upon discovering the killer's true identity, the doctors swear revenge and side with a local fisherman who is supposedly destined to face off with the beast, while the monster rampages through Thai water villages. Geared up and ready to kick some crocodilian ass, Dr. Akom, Dr. Strom, and Fisherman Tanaka head out to sea, and well, fail miserably at accomplishing much of anything.

Not to be confused with the unrelated 2000 Tobe Hooper film.