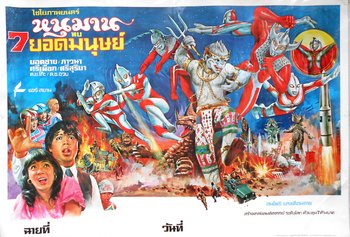 Hanuman vs. 7 Ultraman (released as The 6 Ultra Brothers vs. the Monster Army in Japan) is Tsuburaya Productions' first collaboration with the Thai studio Chaiyo and a curious, if very embarrassing piece of Ultra Series history that debuted in 1974 (but was not released in Japan until 1979 as The 6 Ultra Brothers vs. the Monster Army). This film, plus a handful of other films produced as collaborations between Tsuburaya Productions and Chaiyo are nowadays best known as little more than the prelude to a protracted legal case that began when Chaiyo's figurehead Sompote "Sands" Saengduenchai would try to obtain the franchise through forged legal means, with the case only finally being ended in Tsuburaya Production's favour when the case was brought to the USA on April 18, 2018, thanks to the efforts of the Ninth Circuit District Court.

The plot concerns the sun becoming unusually close to the orbit of the Earth, causing massive heatwaves and drought. In Thailand, Dr. Wisut, a rocket scientist and his crew are devising a way to produce artificial rain through specially equipped rockets. Meanwhile, the children of the country pray for rain near a ruined temple, where three thieves plan attempt to steal the head of a holy statue.

A boy named Koh notices and gives chase, before the robbers violently murder him with three bullets at point blank range to the head. Koh is dead, or so it seems. In the Land of Light, the Ultra Brothers and Mother of Ultra take notice of the injustice and merge the boy with the Hindu deity Hanuman. Hanuman is sent to earth to take revenge on the robbers and correct the sun's distance to the earth.

Although this calamity has been averted, Dr. Wisut successfully launches the first rocket, though a second must be launched in order to complete the operation. It is launched with Wisut's insistence, but reaches a critical level before it can reach the proper altitude, causing a massive catastrophic chain reaction that brings about an earthquake. This in turn releases from the ground five evil monsters; Gomora, Tyrant, Astromons, Dorobon, and Dustpan, who lay waste to the rocket base and battle the air force, which is unsurprisingly vanquished. Hanuman arrives on the scene to fight them and fares pretty well until the monsters gang up on him and Gomora traps him within an energy ball.

It seems Hanuman is defeated, until Ultraman, Zoffy, Ultraseven, Ultraman Jack, Ultraman Ace, and Ultraman Taro are sent as reinforcements and free him. The tides turn again, monster after monster defeated by them. Gomora almost gains the upper hand again, but his powers are destroyed by the Ultra Brothers combined energy rays. Hanuman and the Ultras have good fun beating Gomora into the ground in a rather sadistic fashion, until Hanuman finally slices him in half with an energy cutter. With their job on earth done, Hanuman and the Ultra Brothers say farewell and part ways.

The film launched a short series wherein Hanuman would team up with other Henshin Hero brands, including Kamen Rider (Five Riders Vs King Dark) and Super Sentai.