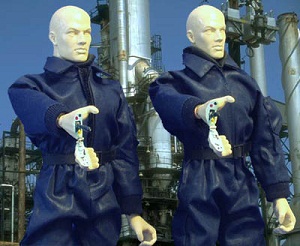 An Arm Cannon: the perfect weapon when you can't move your fingers independently.
"Like every right-thinking person in America, I am wary of mannequins. What are they? Are they alive or dead? No one knows! But what we do know is that they are extremely susceptible to being inhabited by spirits. We all saw the movie Mannequin. I mean, that idea doesn't come from nowhere!"
—Wayne in "Dead Mall", Bless the Harts
Advertisement:

A sister trope to Demonic Dummy, the Murderous Mannequin is a clothing mannequin brought to life and sent to kill. Like Mecha-Mooks, a hero can be shown cutting down swathes of these without moral qualm as they are 'not truly alive.'

Also make for excellent Paranoia Fuel — they're everywhere, and they're staring at you.

Like the Creepy Doll, Demonic Dummy, and Perverse Puppet, part of the eeriness is down to the Uncanny Valley.

Not all living mannequins are murderous. Some are fashionable and kind. They are commonly portrayed as manifestations of consumerism, which can be either good or bad.

Examples of other mannequins: