Film / Ultra Q The Movie: Legend of the Stars 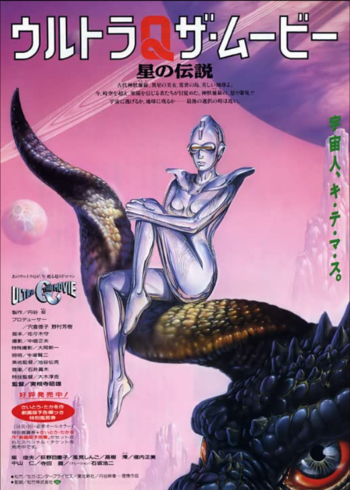 Ultra Q The Movie: Legend of the Stars is a 1990 tokatsu movie released by Tsuburaya Productions, based on their old TV series, Ultra Q. It is notably Tsuburaya's first giant monster movie since 1984's Ultraman Story, Akko Jisouji's first film since the 1979 adaptation of Ultraman and the last Tsuburaya movie containing the Tsuburaya Opening.

A series of mysterious deaths, where executives and CEO involved in a large-scale city development project are found murdered with holes in their heads but without traces of any murder weapons being used, have a team of reporters including the leader Jun Manjone, Jun's sidekick Ippei Togawa, and intern Yuriko Edogawa travelling to Okinawa for an investigation. But the truth is far more mind-blowing and absolutely nothing they could've anticipated — let's just say, the plot involves an alien deity who existed before the dawn of time, and her pet monster, as well as an ancient cult and the alien's hidden underwater spaceship?

Ultra Q The Movie: Legend of the Stars contains one Mind Screw of a plot, but it also have the following tropes: