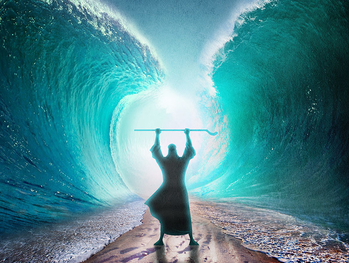 With this staff...you...shall do...MY WONDERS!
Then the Lord said to Moses, "Why do you cry out to Me? Tell the Israelites to go forward. And you lift up your rod and hold out your arm over the sea and split it, so that the Israelites may march into the sea on dry ground."
— Exodus 14:15-16, The Bible
Advertisement:

It's not known why it attracts such attention. It could be the phenomenon of water actually standing still in the air, being able to get an up close view of sea creatures within their home environment without getting wet, or perhaps just the thrill of being able to walk along the seabed. Whatever the case, ever since Moses, the concept of the ocean being parted has intrigued all forms of fiction.

Usually, the means by which this deed is accomplished varies. Most of the time, it's the cause of a magical spell, like from a mystical trident. It can also be done by someone who can control water. Other times, it can be caused by a machine that can manipulate gravity. Even more amazing, it can be a natural event that occurs every millennium or so. And of course, let's not forget the most notable cause, that of Divine Intervention.

Of course, the biggest risk comes when whatever caused the parting ends, resulting in the sea collapsing and returning to its normal state...while there are still people in the space between the parted waves! If one knows in advance that there is a set time to before the phenomenon wears off, that will drive them to hurry as fast they can. Of course, if one is being chased through the pathway, they may take steps to make sure their pursuer is still on it when the water returns to normal.

Naturally, the Book of Exodus is the Trope Codifier. For other ocean anomalies, see Mega Maelstrom. See also Floating Water for other gravity-defying bodies of moisture.