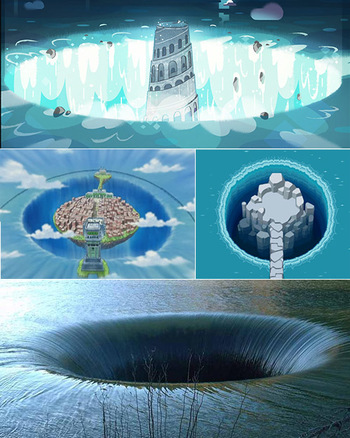 A waterfall located in the midst of a larger body of water that pours continuously inwards — as if rushing over the lip of a suddenly submerged cup. Logic dictates that water flowing over the falls should fill the basin into which it flows, but through some means a void remains and the falls continue to flow. The physics behind this phenomenon can be handwaved away with environmental magic, or the author can conjure up a high tech, super-efficient water recycling machine that somehow keeps the basin from flooding. The space at the center of these waterfalls seems to be coveted real estate, drawing all sorts of examples of Bizarrchitecture. Can be the mark of a not-quite-so-underwater Underwater City.

Dramatically speaking, there's always the possibility that whatever machinery or magic drains the basin will break and the protagonists will be faced with a rapidly flooding arena. Whether or not they can swim is a different story.

Sister trope to Waterfall into the Abyss, in which water cascades off the side of a Floating Island or the edge of a Flat World while being fed by a seemingly inexhaustible source. Also related to Mega Maelstrom, which is mother nature's version of this but with spinning. Can lead to an Inevitable Waterfall moment, even in the middle of an ocean.