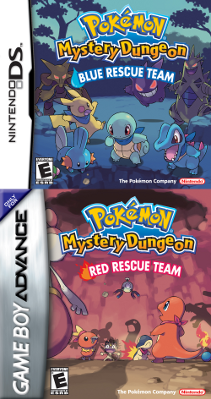 The one where it all began, 10 years after it really began.
"Welcome! This is the portal that leads to the world of Pokémon!"
Advertisement:

The first entry (or rather, entries) in the roguelike Pokémon spinoff series known as Pokémon Mystery Dungeon, Red Rescue Team and Blue Rescue Team were released for the Game Boy Advance and Nintendo DS (respectively) in 2006.

The story concerns the player character who awakens in a world inhabited exclusively by Pokémon, with no memories but their name and the subsequent discovery that they've inexplicably been transformed from a human into a Pokémon. Natural disasters (earthquakes, etc.) have been plaguing the land, and concerned citizens — er, Pokémon — have been banding together in "Rescue Teams" to help out Mons in need. The player quickly allies with another Pokémon to form a two-Mon rescue team of their own, while slowly piecing together clues about how and why they got here.

In the Pokémon Direct on the 9th of January, 2020, a Video Game Remake of the games for Nintendo Switch was announced, dubbed "Pokémon Mystery Dungeon: Rescue Team DX", including features from newer games, such as Mega Evolution, which released on March 6th of the same year. The trailer can be watched here 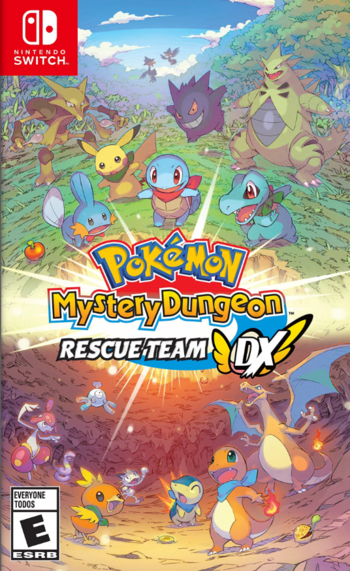 Whatever you do, do NOT steal from Kecleon. (Footage by Majora's Puppet)

Whatever you do, do NOT steal from Kecleon. (Footage by Majora's Puppet)