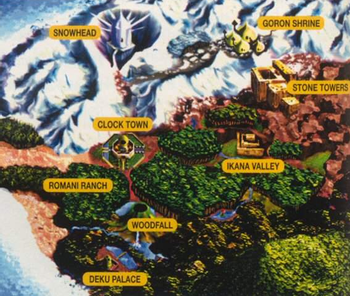 "Many travelers find themselves in Inkopolis Square at some point in their journey. Youth from far-flung seas gather in this colorful hub of comings, goings, meetings, and farewells."
— Splatoon 2
Advertisement:

The city in games that you keep coming back to.

This is usually where The Empire or other important political entity makes its headquarters. The center of politics, commerce, religion, culture, and/or crime, you'll find all sorts of subquests and side-plots here, but you may or may not find the best stuff here, thanks to the Sorting Algorithm of Weapon Effectiveness.

Has an obscene amount of NPCs, sidequests, shops, vendors, and usually Minigame Zones as well. Generally appears in the first half of the game, but players will probably have to return here often. This is the one place most likely to get upgrades and evolving content as the plot progresses.

Compare with Tokyo Is the Center of the Universe and Big Applesauce, when everything takes place in Tokyo or New York; compare also Britain Is Only London for how this can affect the standing of a city being considered representative of the whole region. See Merchant City for the capitalist version, and Holy City for the religious equivalent—either one could overlap. Often has shades of Shining City. May also be a Hub Level.

Not to be confused with Hub City from The DCU, which is a poster child for Vice City.