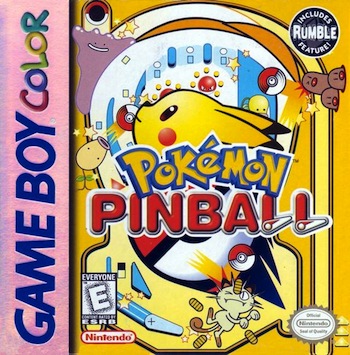 Pokémon Pinball, released for the Game Boy Color in 1999, is a Pokémon Pinball Spin-Off. Players play on either a Red or Blue-themed table (modeled after Pokémon Red and Blue) to earn points and catch Pokémon. Every time a new species is caught through Catch 'em All mode, or evolved in Evolution mode, it is added to the in-game Pokédex. Players can go to different regions to find different Pokémon to catch, upgrade the pokéball for higher scores, and play various Mini Games.

It spawned a 2003 sequel on the Game Boy Advance, Pokémon Pinball: Ruby & Sapphire. Although the game was fundamentally the same, the sequel changed the table layouts, added more Pokémon to the Pokédex, featured the ability to hatch eggs and capture the newborn Pokémon, and offered a shop where you could buy additional game-enhancing abilities.