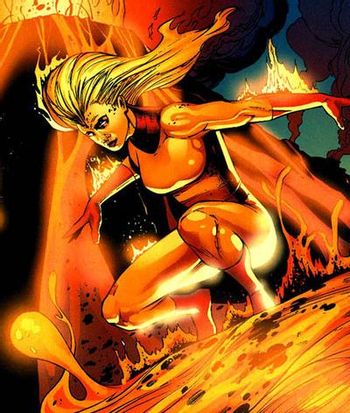 Of course, there can be Magma-Women, too!
"Fools dig for water, corpses, or gold. The earth's real treasure is far deeper."
— Grim Lavamancer,

A character who has power over all things igneous: magma, lava, and hot rocks. They can either liquefy ordinary rocks, control the flows of a perpetually active volcano, or simply manifest the hot heavy stuff ex nihilo. Could be considered a combination of Dishing Out Dirt and Playing with Fire; a character with power over lava might possess these powers separately as well, or two separate characters with these abilities might use a lava-based Combination Attack.

A Sub-Trope of Lava Adds Awesome. Compare Living Lava, and Elemental Embodiment of lava that may or may not be able to control lava separate from their own body.

Residing in Redpepper Volcano, this sentient lava ball attacks Mario when he reaches its room.

Residing in Redpepper Volcano, this sentient lava ball attacks Mario when he reaches its room.