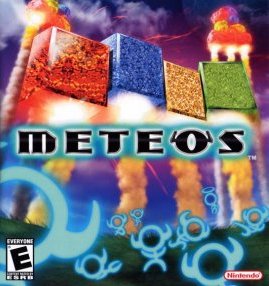 "It was a dark time... The existence of all planets was threatened by one: the evil planet Meteo. A stream of phantasmagoric matter flowed endlessly from the planet. This matter - called Meteos - crushed life and stole the sparkle of the universe. World after world fell... But then, by chance, three Meteos of the same type aligned. Fusing together, they ignited, firing the other Meteos into space! A defense strategy was formed: the civilizations of each planet launched counterattacks by fusing Meteos in different ways. Thus the last, desperate stand versus Meteo began. The Metamo Ark - a warship made of Meteos ore - set off as a bastion of hope, with the fate of the universe resting on a lone civilization's valor."
-Introduction/Synopsis
Advertisement:

Meteos is a Nintendo DS Falling Blocks Puzzle Game, released in 2005, created by Masahiro Sakurai, of Kirby and Super Smash Bros. fame. His first work as an independent developer apart from HAL Laboratories, Meteos was instead developed by Q Entertainment. As of this writing, it is Sakurai's only work apart from Nintendo (who still published the game in the West). Despite the pedigree and similar feel and features to his past work (Music vs. SFX slider, Item Switch, multiplayer emphasis), it comes off as a wholly original project.

The game is set in a universe mostly populated with either Single Biome Planets or Planets of Hats, all inhabited by scribble-like races. The evil planet Meteo is steadily destroying the universe with a stream of 'phantasmagoric' meteors, called Meteos (Meteo being the Japanese transliteration for "Meteor"). However, by chance, three Meteos of the same kind align above a planet, launching the entire stream out of the victim planet's atmosphere. With this knowledge, a planet's civilization (you) sets out to defeat Meteo with their shape-shifting ship.

Like many puzzle games, the concept is to line up three or more blocks (Meteos) of the same color/kind, moving them once they have landed. However, instead of simply disappearing, the Meteos will then ignite, becoming burnt blocks and propelling the blocks above the burnt blocks into the atmosphere, where they are then launched either into deep space or at an opposing player's atmosphere (play field). In addition, most launches require you to match a trio again while the chunk is still in midair in order to clear the top of the screen, each subsequent ignition being morenote Or, on some planets, less powerful. Throw in various explosive items and the ability to speed up the gameplay, and you've got a diabolically tense puzzler. The only catch is that you can only move the blocks up and down.

Each planet (field) has its own traits, including width, gravity, block descent speed, and launch power. Each of the 40 planets (including Meteo) has its own civilization, music, and stage decor, all in a common theme, such as Firim/Ignius, the lava planet, or Globin, the red blood cell-shaped planet with breathing as its music's backbeat. Each planet's advantages and disadvantages make them more like characters than levels.

There is a Mission-Pack Sequel based on Disney properties instead of planets, which allowed enabled blocks to be moved horizontally on all but the highest difficulty.

A proper sequel, Meteos Wars, was released on the Xbox Live Arcade in 2008. It introduced online play, planet-specific special attacks, more planets and unlockable costumes for the aliens.