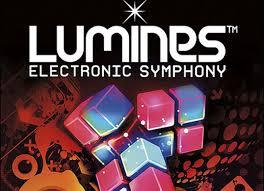 Lumines is a series of Falling Blocks puzzle games started in 2005 by famed Space Channel 5 designer Tetsuya Mizuguchi, as one of the first PlayStation Portable titles and the first one under his new game label, Q Entertainment. The premise is much more simplistic when compared to other games like it...blocks fall in 2x2 squares, and the player can only score points by matching up squares of the same color (2x2 or larger). As the music plays in the background, a timeline sweeps the joined blocks away and adds lights and sounds to the mix. Players advance through levels, or "skins" (which changes the background, music, score display, sound effects, even the block appearances) and the tempo of the new songs switches up frequently, requiring the player to stay on their toes as things get harder and harder.

Lumines proved very popular in Japan, selling more than half a million copies since its initial release. It also garnered Greatest Hits status in North America and Europe, prompting a mobile phone version of the game created by Gameloft. A direct sequel was made the following year, and it was later joined by Lumines Plus for the PlayStation 2 and Lumines Live for Xbox 360's Live Arcade. A port of Lumines 2 (with some skins and VS modes removed, plus the Lumines Live interface) was released for the PC, distributed by Wild Tangent Games and Steam. In 2009, a PlayStation 3 version of the game called Lumines Supernova was released on the Playstation Network, which contained a new mode called Dig Down mode, and new skins (including one based on LittleBigPlanet). Lumines Touch Fusion was released for iOS in 2009. A Playstation Vita installment, Lumines Electronic Symphony, was released in 2012. A remake of the first game, Lumines Remastered, was released for Nintendo Switch, PlayStation 4, Steam, and Xbox One on June 26, 2018.