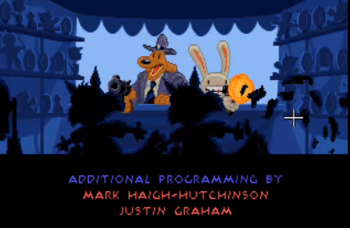 Now that you've beaten the game, why not relax?
Advertisement:

You just beat the game! Congratulations! Now, time to view the Closing Credits...

Except that certain games have a Mini-Game in which you interact with the credits themselves. Doing this can make players actually pay attention to the names in the credits, since otherwise people tend to ignore or outright skip them. Doubly helps if there's an in-game reward for playing the mini-game well.

It's common that the game's usual controls carry over to the credits in this case, though it's not the only way to interact with the names of the people behind the game.