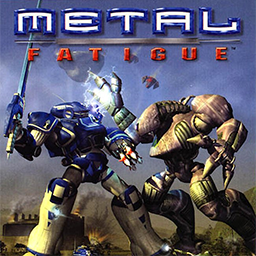 Metal Fatigue is what happens when you take Command & Conquer, replace the infantry with vehicles and the various tanks with Humongous Mecha. Developed by Zono Inc. and published in the US by Talon Soft and in Europe by Psygnosis in 2000, it stands out from similar games by boasting a three-level battlefield and customization of the game's primary units, called Combots.

The single-player campaign tells the story of three brothers: Diego, Jonus and Stefan Angelus, as well as three "CorpoNations",: Rimtech, Mil-Agro and Neuropa Limited. Each CorpoNation has its eyes set on a distant world where a cache of potent alien technology is believed to be hidden. Armed warfare ensues between the three as soon as each makes planetfall. In the opening Cut Scene, the three brothers, working for Rimtech, find an alien Energy Weapon while on patrol. Diego, the eldest brother, understandably plans to take the weapon back to their superiors. Jonus, the middle brother, has other plans, however, stating that Neuropa would pay top dollar for the technology. An argument ensues, and would have come to blows were it not for a sudden Mil-Agro airstrike. In the ensuing chaos, Stefan, the youngest brother, is hurled over a cliff, Jonus escapes with the alien weapon and Diego returns home empty-handed, believing Jonus a traitor and Stefan killed in action. However, Stefan turns out to have survived his fall, though he was implanted with a mind control chip by Mil-Agro and pressed into service as their newest champion.

Thus, the stage is set for brutal confrontation between the brothers and through them, the CorpoNations.