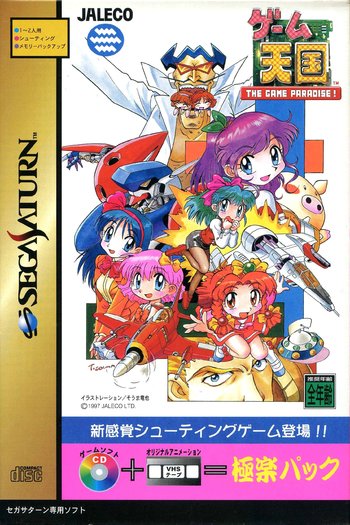 Game Tengoku - The Game Paradise!, also known as The Game Paradise! - Master of Shooting! in the Western release, is a 1995 vertical Shoot 'em Up Arcade Game made by Jaleco featuring actual arcade game characters traveling through the fictional arcade games of a Japanese game center to save it from the menace of one Genius Yamada who wants to conquer it and, through it, the entire arcade game world. Confused yet?

Basically, it's a Massive Multiplayer Crossover featuring several of Jaleco's characters from their older franchises (and not only shmups) inside shooting stages made to look like other video games and arcade machinery. An arcade game about arcade games set in an arcade... it's all very meta, and this also allows it to feature several nods to other Jaleco properties and parodies of gaming franchises from other companies. It not only homages arcade culture but anime as well, with several anime tropes and, most importantly, the characters being voiced by famous voice actors such as Tomokazu Seki, Hekiru Shiina, Kae Araki, Ryotaro Okiayu, Shigeru Chiba among others. These seiyuu reprised the roles in The Anime of the Game (see the trope list below) in typical hammy fashion.

Game Tengoku received in 1997 an Updated Re-release for Sega Saturn and in 1998 a sequel, GUNbare! Game Tengoku, but only for the Japanese PlayStation. The sequel adds home console games and handhelds to the list of the featured devices. In November 2017 a remake of the Saturn Port titled Game Tengoku CruisinMix was released for Steam, with all the elements from the Saturn port plus new modes like Time Attack Mode and Arcade Mode+, where one can use brand new DLC characters. It was later released for PlayStation 4 in July 2018, and a further enhanced edition subtitled CruisinMix Special was released in November 2018, alongside an English version. A Nintendo Switch port has since been released.

The tropes for both games:

The tropes for both anime shorts: