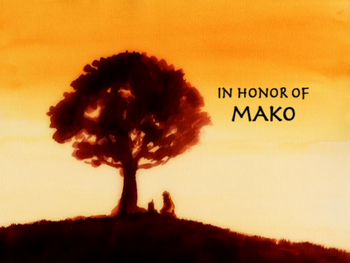 Memorials to the dead are common in most human cultures. When the dead are connected with a TV show or movie, you'll sometimes see this: a final tribute to that person as part of the show.

For a true In Memoriam, there is a direct connection between dedicatee and the show, book or film being dedicated to their memory. There are a great number of books dedicated to the last astronauts of the space shuttle named Challenger or the emergency personnel who died when the twin towers of the World Trade Center in the city of New York in the state of New York collapsed. Unless the book is about them, those would fall under the larger Dedication trope.

It is a Celebrity Elegy when done through song or poetry for a famous person. For more musical examples, see Grief Song. Fanbases may turn to Death Fic. A Memorial Character is a character based on or named after a deceased person, as a way of immortalizing them.

This is related to Meaningful Funeral, which memorializes a character from the show. They can overlap when a show is based on Real Life.

Also see Special Thanks (where the credits acknowledge loved ones and friends of the production crew who weren't directly involved with the production and in most cases are still alive at the time of release) and Posthumous Credit (where the deceased actually contributed to the work prior to their death and have their part acknowledged in the credits, which in many circumstances will overlap with this trope).