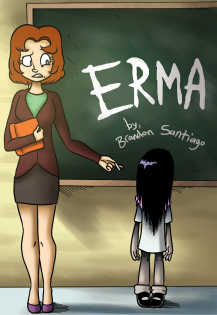 She's just like you and me, only Creepy Cute

Erma is an online comic by Brandon Santiago

about a Stringy-Haired Ghost Girl trying to live in mundane society. It takes a lot of inspiration and aspects from horror movies and adds a humorous and cute twist to them.

It can be found at Tapas Comics

as well as Webtoons

On Halloween 2017, Brandon revealed a special surprise for the fans: an animated short based off the comic. You can see it here