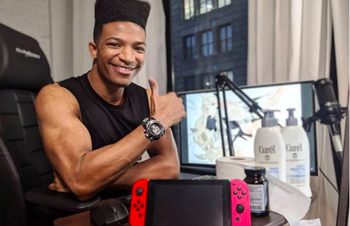 Desmond Daniel Amofah (May 12, 1990 – c. June 19, 2019), better known as Etikanote derived from a modification of the "EkiTa" cheat code in Sonic Battle Amofah made when he was 12, was an American YouTuber, livestreamer, and model. A son of Ghanaian politician Owuraku Amofah

, he was known for his reactions to various Nintendo games and products.

His channel EWNetworknote short for "Etika World Network", prior to its public deletion, was originally meant to be a collaborative effort between multiple users, but in the end, only Etika ended up using the channel. He rose to prominence during the rise of Super Smash Bros. for Nintendo 3DS and Wii U, often discussing elements and new developments regarding the game.

His channel consisted largely of stream material, namely playthroughs of recently released games (which he rarely, if ever, finished) and over-the-top reactions to trailers, alongside additional edited videos. His fanbase, which is (in)famous for being very enthusiasticnote As in, "regularly clocked at an average bare minimum of 10,000 concurrent stream viewers" enthusiastic, is collectively referred to as the JOYCONBOYZ (occasionally the JOYCONMEN

In October 2018, Etika experienced what is now believed to be a manic episode that involved him deleting the EWNetwork channel and exhibiting increasingly erratic online behavior. He subsequently relocated to another channel called EtikaFRFXnote FRFX = "for real facts", only for it to meet a similar fate in April 2019 due to another, much worse manic episode. His only currently existing YouTube platform is the side channel TR1 Iceman

, which was dedicated to more chilled-out, improvised streams.

Throughout the rest of April and up through June, Etika's mental health took a sharp downwards decline, with worsening episodes of mania prompting him to act increasingly hostile in addition to his erratic behavior, leading him to be hospitalized multiple times under police restraint. He was last heard from on the night of June 19, 2019, and was reported missing the following day. On June 24, a body in the East River was reported to the NYPD; the following morning, the NYPD confirmed

that the body was Etika's, and that he was dead at the point of recovery. His death was determined by the coroner's office to be suicide by drowning.

Prior to his disappearance, he had posted a video onto YouTube in which he heavily alluded to suicide. It was shortly deleted thereafter for violating YouTube's Community Guidelines, but it was quickly archived and reuploaded several times across the Internet, including on Wikimedia Commons where it was previously used on Wikipedia.

Uploads of his old videos and stream highlights can be found on RoseKami's channel,

alongside several others run by fans.

and his subreddit is here.

I'll talk to you in the next one. Take care of yourself, and of course, as usual, please have yourself a damn good one.