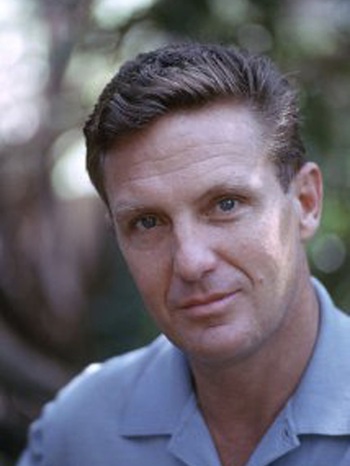 "Join me. Perhaps you may be able to help solve a mystery."
Advertisement:

Robert Stack (born Charles Langford Modini Stack; January 13, 1919 – May 14, 2003) was an American actor and TV host. He was best known for starring in The Untouchables as Eliot Ness and for hosting Unsolved Mysteries. He also had a lengthy film career, earning an Academy Award nomination for Written on the Wind. Although he mostly acted in dramas, he did the occasional comedy such as To Be or Not to Be and Airplane! (in which he poked fun at his straight-laced persona).

He was married to model and actress Rosemarie Bowe from 1956 until his death. They had two children.