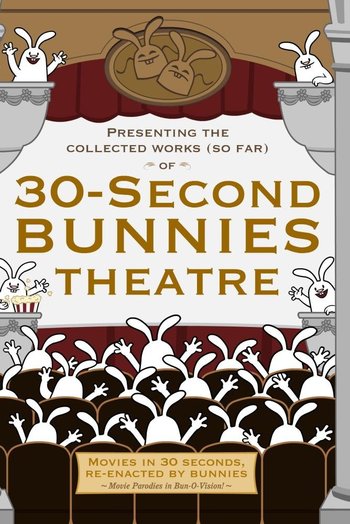 A Web Animation series of Adaptation Distillations of well known and beloved movies... made by bunnies.

Oh, and Jennifer Shiman, who directs the bunnies and writes the scripts. But mostly bunnies, helped and organised by Jennifer Shiman, the Duck and Snortleby. He's got a very responsible job of attaching the ears where appropriate, despite being small and made of beanpaste.

The whole company is known as Angry Alien Productions

. You can find its IMDB profile here

There's also a short interview with a bunny actor and some Hilarious Outtakes (scroll to the bottom of the page). Most tropes are inherited from the reenacted movies (only shorter), but there are some specific to the bunny versions.

A Trope Parody in Bun-O-Vision (in 30 seconds, more or less):