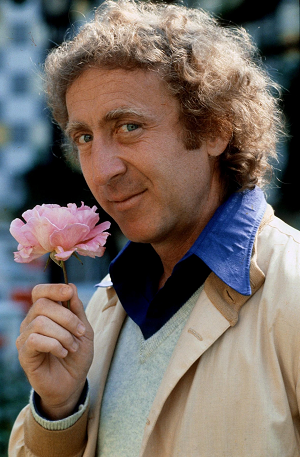 "We are the music makers, and we are the dreamers of the dreams."
"A little nonsense, now and then, is relished by the wisest men."
— Willy Wonka & the Chocolate Factory
Advertisement:

Jerome Silberman, better known as Gene Wilder (June 11, 1933 – August 29, 2016), was widely regarded as one of the greatest comedic actors of the 20th century, if not the greatest. He was best known for being the first actor to portray Willy Wonka (see right), for his collaborations with Mel Brooks, and for his four co-starring appearances with Richard Pryor.

His desire to act started at the age of eight, when his mother was stricken with rheumatic fever. The doctor sternly warned the young boy that any stress may prove fatal. So, he impressed on him one important lesson: "try and make her laugh."

Wilder met and fell in love with Saturday Night Live original cast member Gilda Radner on the set of the movie Hanky Panky (1982). They wed in 1984 and appeared together again in the films The Woman In Red and Haunted Honeymoon. Radner died following a long battle with ovarian cancer in 1989, after which Wilder established the Gilda Radner Ovarian Detection Center at Cedars-Sinai Hospital.

Wilder essentially retired from acting around the Turn of the Millennium (save for a couple of guest appearances on Will & Grace in 2003), and afterwards he devoted himself to writing. He died in 2016 at the age of 83 from complications with Alzheimer's disease.